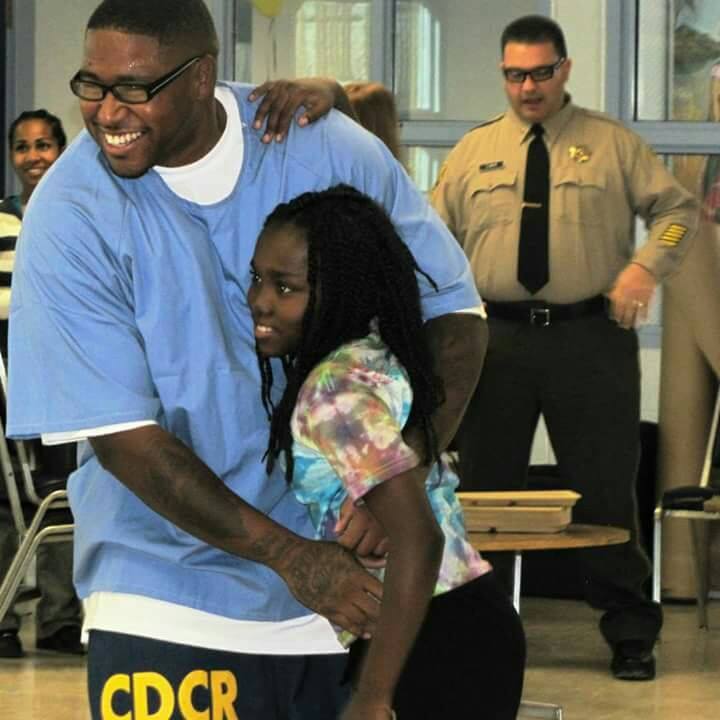 Kids attend all sorts of camps during summer. Camp Grace brings together maximum security inmates and their children for one week. It runs in several California state prisons with dreams of expanding.

Inside Salinas Valley State Prison, the visiting room has become an art gallery. Life-size murals made out of paint, cotton balls and glitter are on display. Inmates and their children have been working on them all week at Camp Grace. The theme of the murals is ‘a perfect day with dad.’

On the last day of camp, families are sharing their artwork. Inmate Rudy Ellis and his daughter Taniya, 13, stand in front of theirs.

“For our mural, I graduated this year from the 8th grade. And my dad, he wasn’t there to make it and so he came up with the idea for me doing my graduation. So he’s holding my certificate,” Taniya says.

The mural depicts a scene in front of Taniya’s middle school. She and her dad are standing side-by-side. The sky is light blue with glitter. Her brother is the sun, a metaphor for being Rudy’s son.

This is the second time Camp Grace has come to Salinas Valley State Prison. It’s a maximum security facility in Soledad.

The Ellis family has participated both years. Rudy says last year, their mural had even more glitter.

“Every morning I wake up, wherever I go, I kept seeing glitter everywhere. Like on the lockers, on a bunk, on the floor, on my clothes, I’m just like all this glitter. But it made me smile,” says Rudy.

Eventually, the glitter disappeared. But the memory of it didn’t. That motivated Rudy to stay out of trouble in prison. In order to participate in Camp Grace, the dads must be discipline free for a year.

This year, there are eight dads and ten children at camp. The children stay at a nearby campground and visit the prison during the day. The families get five days together.

Taniya lives in Compton, so she usually visits about once every two months.

“My one-on-one time with my dad was really good because I feel like I needed that,” says Taniya.

“It’s always a beautiful thing to bond with your child. Especially in this type of environment,” says Rudy.

The families bond by journaling and playing games like ‘thorns and roses’. That’s where they share something positive and something tough.

As a football game picks up in a nearby fenced-in yard, Taniya and her dad sit down to talk.

“Trying to parent and be a father from this situation is kind of difficult. And you know, you do the best you can. Just give much love much, much life experience so they don’t go down the wrong path,” Rudy says.

Rudy says he joined a gang when he was young. He says he was sent to prison for assault with a deadly weapon and murder twelve years ago.

“They can’t reconcile with their victim directly. The crime has been done,” says Alexandra Powell. She works for the California Department of Corrections and Rehabilitation.

Powell says most of these inmates will eventually get out. So she says developing family connections matters.

“That all contributes to a positive re-entry into society and a lower chance that they will commit other crimes,” Powell says.

Today, Camp Grace runs in two California prisons and is funded by the state. McDaniel hopes to expand. But getting more funding is a challenge.  McDaniel says many people feel these dads don’t deserve this.  She brings it back to the kids.

“Often times they’re told you’re just like your dad. There’s expectations that that they’ll never be anything because their father’s in prison. And so by coming here they’re able to be with other children that suffer the same trauma that they do. They can speak openly about their pain and they can shine here,” McDaniel says.

McDaniel has seen Taniya gain confidence through this process. During a performance on the last day of camp, Taniya sang “No One” by Alicia Keys.

“You saw some of our kids doing their show today and one of them was Taniya. She showed what a beautiful talented singer she is. This is her story and it’s okay for it to be her story and she can turn it into power instead of pain,” McDaniel says.

And Taniya can leave Camp Grace knowing her dad is there for her.

After the kids say goodbye to their dads, they make them cards that arrive at the prison a few days later.