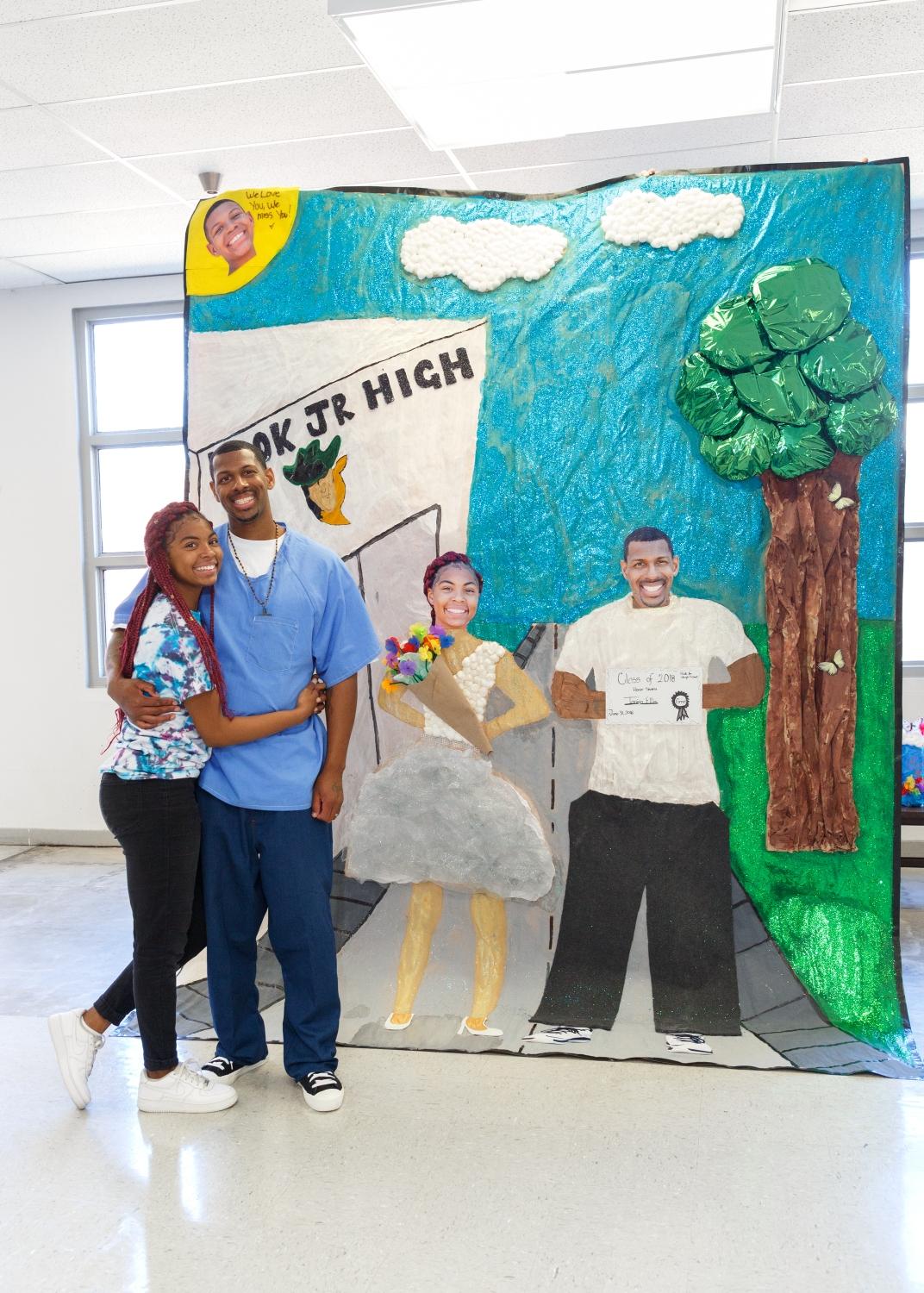 For 11 years, Kamorrie Randle has only known his son Jackson through phone calls and visits to Salinas Valley State Prison, where Kamorrie is serving time.

In 2005, Kamorrie was 18 years old when he was sentenced to 125 years-to-life for murder. His son’s mother was four months pregnant with Jackson at the time.

Yet last week, the pair made up for lost time. They created art and played sports and games — all at the level 4 prison.

Those activities may be commonplace for other families. But they served as rare opportunities for fathers to bond with their children during Camp Grace, an extended visitation program for children of the incarcerated.

“To sit and eat and play and do the drawings and the paintings, it’s so wonderful,” Kamorrie said. “It’s a different experience to be incarcerated and to have that. It’s a blessing.”

The week-long camp is offered through the Lancaster, California-based non-profit Place4Grace and is designed to strengthen family bonds while encouraging offender rehabilitation.

“What I love about my dad is he’s there for me,” Jackson, 11, said. He hugged his father tightly. “He’s not one of those dads who doesn’t call … He calls whenever he can. He’s a great father.”

Read:Woman gets 15 months in prison for texting boyfriend to carry out his suicide

After visits with his father, Jackson’s behavior improves for months.

“His mother tells me about it, and I try to do the best that I can from being behind these walls but I just don’t want him to go down the path I went down,” Kamorrie said. Your stories live here.Fuel your hometown passion and plug into the stories that define it.Create Account

Kamorrie never learned to read, and when Jackson makes fun of him for not knowing how, he reminds his son that’s why he needs to focus on school.

“He’s a good kid, and this program really helped me to see what I’m missing and it’s family first,” Kamorrie said. “It’s family over everything.”

On Friday, the final day of Camp Grace, the children performed their own version of the song “See You Again” by Wiz Khalifa for their fathers. They altered the lyrics slightly, singing, “It’s been a long day, without you my dad, and I’ll tell you all about it when I see you again.”

Read:How O.J. Simpson has tried to protect his children while in prison

The fathers shared partnered dances with their sons and daughters before laughing through a group dance to the “Cupid Shuffle.”  For some, it was the first time they had ever danced together, and many became emotional.

“I started thinking in the future about my prom and wedding dances and everything,” Jackson said. “I know he’ll get out soon, and he’ll be there at prom and my wedding and everything else before then.”

Each family created a mural during camp themed “a perfect day with dad here” as well as their family crests. Some painted images of them swimming, playing basketball or just hanging out at home — together.

The children and fathers also shared a group birthday party to celebrate birthdays they’d missed during the year.

When Keelon Francisco of San Bernardino entered prison eight years ago, he said he was close with his family, and he has tried to maintain that bond with his now 13-year-old son Cameron.

“It’s been kind of hard to be there still as a parent and give your advice, but don’t come off as overbearing or mad or whatever, so you just try to find out what’s going on in their life,” Francisco said. “Children, sometimes, they don’t like to use words or they don’t really want to talk. … To not be able to see, and just hearing about it through words, it’s been kind of difficult.”

Francisco already knew he would treasure memories of playing baseball and football outside with his son. The experience also gave him the sense of being “humanized” again, he said, as Camp Grace staff called him by his first name and offered support throughout the week.

Children between the ages of 8 to 14 are able to participate in Camp Grace, and the fathers have to meet certain criteria, such as remaining discipline-free for a year.

The extended visitation “really allows children to get through humps that they can’t get through during regular visiting,” said Place4Grace Executive Director Karen McDaniel.

“Children experience a lot of emotions when they come to visit their parents, and at Camp Grace, they’re allowed to work through those emotions throughout the course of a week,” said McDaniel, whose background is in educational psychology.

While studies have shown children of incarcerated people have higher rates of delinquency and other issues, “what we find is that children who are connected to their parents really have a lot less trauma than children who do not stay connected,” she said.

“Coming back to see dad each day and having that extended day without another parent there, just totally alone time with dad, allows them to say things, share things and ask questions that they may never have had before so it’s really important to have the full week together,” McDaniel said.

Jose Cervantes often protectively held his arms around his 9-year-old son Alex and talked to him during their Camp Grace week. Before the camp, they hadn’t seen each other for 16 months.

While they usually try to cram a lot of activities into limited visitations, the five days together during Camp Grace allowed for more relaxed communication and bonding time.

“There’s been a lot of things he’s told me that he’s never told me before,” Cervantes said. “So it’s better communication and better understanding of each other’s needs or wants, and how it’s affecting both of us … It’s to bond. You get to listen to your child and get to know him better.”

On Friday, the father and son were sad knowing it was the last day of the camp, but energetically participated in the group activities.

“When I got incarcerated, I thought it was all about me,” Cervantes said. “But slowly but surely I started to see how my son’s growing up out there without his dad… It affects everybody who loves me. I’m not the only one paying for it, they’re paying with me so what I can do is better (myself) and change that.”

Camp Grace is offered at no cost to the families who sometimes live across the state from where their loved one is incarcerated. During the week, the children are housed in a nearby community, and after their daytime activities with their fathers at the prison, they participate in group activities with Place4Grace staff and volunteers at night.

Camp Grace was first held at Calipatria State Prison in 2012 and has since received an Innovation Grant from the California Department of Rehabilitation and Corrections to continue the program for three years at prisons like Salinas Valley State Prison. The Innovative Grants Program seeks to expand successful rehabilitative programs to underserved prisons.

Last week was the first time for Camp Grace to be held at Salinas Valley State Prison, and the program included six inmates and their eight children.

CDCR Spokeswoman Krissi Khokhobashvili said programs like this are the type of approach the department is moving toward.

At the very least, the program incentivizes inmates to have good behavior, which lends itself to a safer prison, and “from a larger perspective, staying connected with your family is so vital to your success both during and after incarceration,” Khokhobashvili said.

“You need to have a support system in place. So often, families, when someone goes to prison, they become disconnected. It’s hard,” she said. “It’s hard to talk only on the phone. It’s hard to communicate only via letters. Your loved one might be hundreds of miles away from you and financially, it’s difficult for you to get to them physically.”

Rudy Ellis’s daughter Taniya was 2 years old and his son Cameron was not even born when he came to prison more than ten years ago.

“To be a father and be incarcerated in here, it’s challenging because you’re trying to be there for your kids, to not only to teach them and mold them and guide them through life, but also be a solid person to be there with them. It’s difficult,” Ellis said.

It’s been hard for his children to understand why their father can’t be there in person at times, he said. Ellis also shares his experiences with his children in hopes of steering them in a positive direction.

Taniya wants to be a district attorney when she grows up while Cameron wants to go to Stanford University. When he talks about that, his pride his obvious.

“I made some bad choices at a young age,” Ellis said. “I chose to be a gang member, and because of that, it landed me in this situation. So I let them know this is not what you want. Gang-banging is going to lead you to jail and the graveyard. Here, you try your best to change, become a better person and just do the right thing.”